This is the Haft-Seen table for Iranian New Years!

It was the Iranian New Year during GDC!

To be totally honest, I was surprised that I was selected to be an IGDA Scholar this year. I was worried that my activism and my desire to support change in the games industry might be counter to what the IGDA was looking for. I was thrilled when I was accepted, and very nervous!

To break my experiences down, I’ll separate this post into several parts. First: the talks!

From Red to Rukey: Animation and Rigging by Camilo Vanegas

Camilo’s talk was one that I had been looking forward to since I heard about the talk. He’s worked on Transistor and Pyre. As a new student in 3D art, I’ve already learned that I love the process from modeling to texturing and even animating. According to Camilo (and many others), this is a good sign that you’ll like working on smaller teams or at smaller studios where you can really own all the different parts of the process.

I found that this talk was way too advanced for me even though it was geared for students. Camilo’s work is freaking *amazing* and inspiring. I think the main take away is: really stick to some principles and goals of your characters and the design process.

Eos is Alive: AI in FFXV

Holy geez, I thought the animation talk was tough! My other (current) passion is understanding how to implement AI for my creatures and models. I know that AI is one of the most complicated systems to learn and so my main goal in attending these talks was to just break through my own mental wall and expose myself to as much knowledge as possible so it would be less alienating. Also, FFXV’s AI is AMAZING.

The main takeaway from this talk, for my still newbie status, was the importance of developing hierarchies and using inheritance to manage complex systems where you have a huge database of monsters and characters in the world. Object-oriented programming is exceptionally challenging and complicated, but I liked how I could see a structure throughout the talk!

‘A Mortician’s Tale:’ A Different View on How Games Treat Death

This talk was probably my favourite of all the talks at GDC this year! Gabby DaRienzo began by talking about her personal experience with death as a child and how video games helped her explore death and dying in safe and engaging ways. She then spoke about a brief history of death in games – one of my favourite parts!

There are frequent evaporating-body phenomenon of most games with the combat mechanic (Call of Duty franchise, enemies in Zelda franchise), death is often used to motivate a character’s revenge story (Dishonored), and death can also be tied to meaningful narrative (Final Fantasy VII).

In A Mortician’s Tale, the mortician prepares bodies for burial and interacts with different folks at funerals and burials. 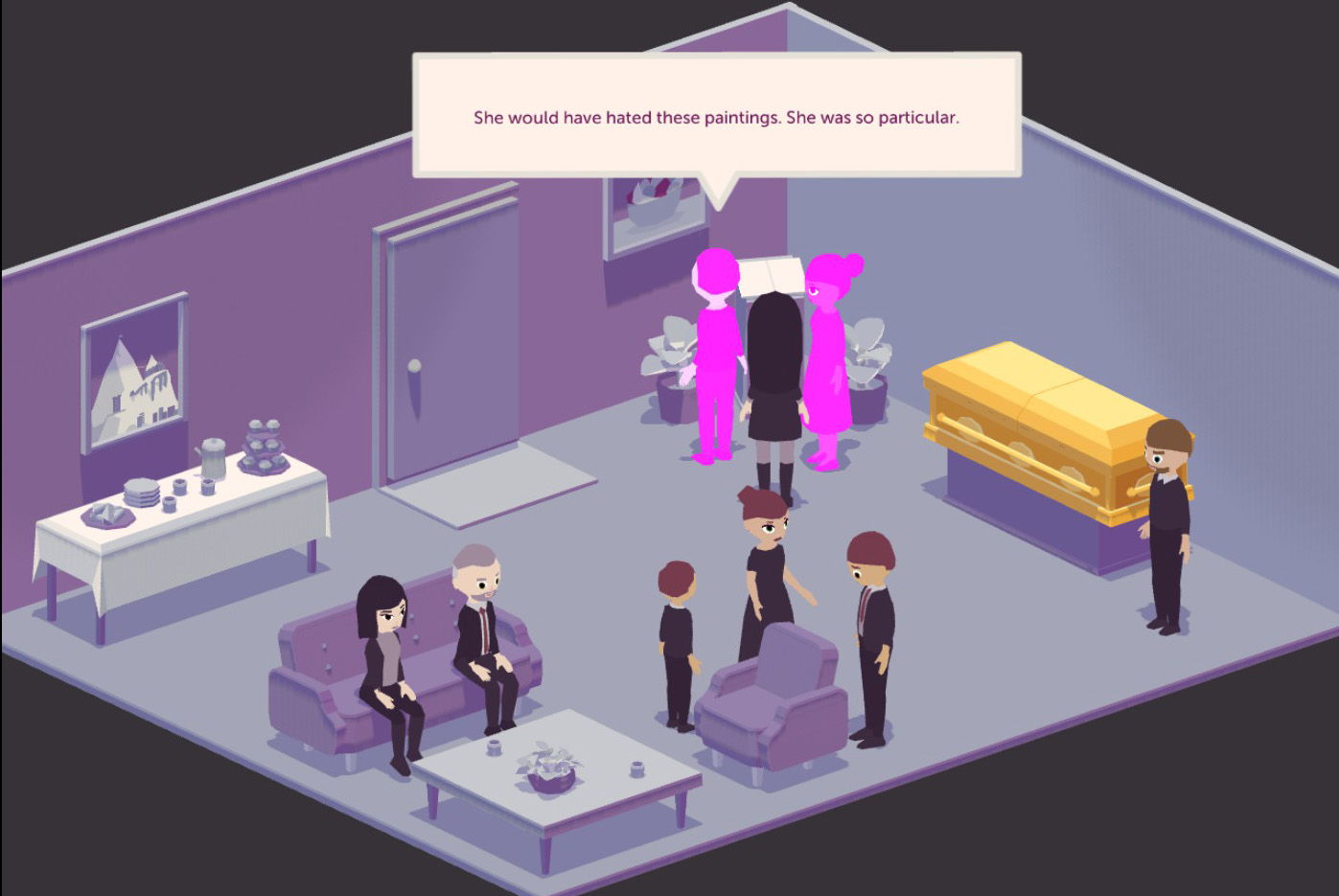 The narrative and game mechanics promote what DaRienzo calls, “death acceptance.” In the specific narrative of the game, players can interact with the sadness and variations of grief as well as the bodies of the dead. This has had a profound impact on players around the world. Some people were able to confront their own grieving processes outside or were given a structure to discover how to mourn.

DaRienzo explained how the game treats death and the process of preparing a body for burial with respect and therefore required linear storytelling and carefully crafted gameplay.

A Fun Time in Which Some No-Good Game Developers May or May Not Discuss ‘How we made NieR:Automata’

I so much enjoyed this talk by Yoko Taro and Takahisa Taura! I appreciated that the talk was entirely in Japanese with a fantastic English translator and that the slides were beautiful and clear. I was so excited for this talk that I lined up an hour in advance, well aware that it would be a packed room (and it was!).

What is freedom in games? How do players experience freedom?

For Yoko Taro, freedom was restricted on the development side by financial limits. So, he thought about how to give players a different idea of freedom. I’m not going to go into this *too* deeply because I think it’s worth it to watch the talk in the vault if you can. Instead, I want to talk about the last part of Yoko Taro’s presentation where he brought up the idea of helping other people that you had never met before.

As a game designer, I want to create worlds where people might make discoveries about their own motivations and challenge their own worldviews. Yoko Taro, I think, was able to do that with the final credits of Nier: Automata which plunge the player into an extremely difficult bullet-hell gameplay section. When I played the game, I died a *lot*. Accounting for this, players are prompted that they’re being helped by others who had already finished the game.

Yoko Taro mentioned that his original idea was to make it *mandatory* that players help each other. But, he realized that this would have been projecting his own ideology onto others. Instead, he gave players the option to choose whether or not to erase their entire progress and achievements in order to help strangers navigate this last challenge. In his talk, he said, “if I got people to think about strangers that they had never met, even for just a few moments, then I consider that a victory.”

Nier: Automata is a game with a very heavy-handed message, and I still loved it even though I knew the story wasn’t “for me”. I loved every minute of it. Even in the last moments of the game, even with a degree of freedom about whether or not to help a stranger finish their game, I felt the strength and the hope of the game designers.

Stay tuned to part 2 of this blog where I’ll talk unions and my own personal experiences! ❤